Graciousness Survey 2022: Exposure to kind acts or news affects the perception of graciousness

SINGAPORE – 20 June 2022 ━ As Singapore progresses into a post-pandemic world, Singaporeans acknowledge that being gracious and kind remain important values that we should practice as a community. However, the external elements, such as exposure to news and reduced social interactions, may have impacted the perceived graciousness in our society as a whole.

The findings have come from Singapore Kindness Movement’s (SKM) latest Graciousness Survey. Since 2008, the survey has provided behavioural insights and indicators on graciousness and kindness in Singapore, establishing a framework for SKM’s focus, strategies, and plans in the coming year.

The study polled a demographically representative sample of 1012 respondents via online surveys from 6 to 26 January 2022.

The overall state of graciousness in Singapore has remained stable. It is observed that small acts of graciousness, such as consideration and appreciation for others, especially towards older generations or vulnerable segments, continue to have grown in frequency. However, there was a drop in respondents who claimed to have done or seen acts of graciousness, which is likely caused by continued restrictions limiting social interactions during the pandemic.

Exposure to news can also affect the perception of graciousness

More than half felt that when witnessing a kind act, they feel encouraged to do the same. Over half of the respondents also indicated that reading about positive news makes them feel good about society as a whole. However, only a third claimed to have seen more gracious behaviour in the news compared to acts of ungraciousness.

Generally, positive news invites positive comments and sentiments. Through desk scan findings, we found that such positive news leads to encouraging acts such as supporting charities and businesses that champion a social cause. Even when COVID-19 brought about some negative news, there were opportunities for the public to step up and contribute to those affected. This shows that the media has a big role to play in influencing perceptions and potentially behaviours.

While the overall perception of Online Graciousness remained stable from 2020, Singaporeans still acknowledge that more can be done to raise awareness of its importance. In the survey, over 70% of the respondents agreed that negative online behaviours such as trolling and cyberbullying would affect how they perceive graciousness in offline environments.

The overall satisfaction with neighbourliness has remained relatively high. However, there has been a noticeable drop in the percentage of satisfaction with neighbour relationships. The increase in dissatisfaction could be attributed to the pandemic as more time is spent at home, which increases the encounters with such neighbourly inconveniences. Among the ungracious behaviours listed, noise, clutter and second-hand smoke have been highlighted as prominent issues.

It was also observed that while there has been an increase in neighbourly inconveniences, only a third were willing to resolve these issues. There is a segment of the population that were likely to not have even tried resolving issues. SKM is looking to delve deeper into these associated barriers and how they can be addressed.

All in all, most neighbours were satisfied with each other, and yearned for quiet, pleasant and clean living environments, while some aspired for deeper neighbourly relations. To reinforce and strengthen our march towards a gracious society, SKM has also launched the “A Kinder You, A Stronger Us” campaign narrative as an extension to the ‘Be Greater’ campaign which emphasises the collective strength that comes from each individual kindness and reinforces that kindness is the fundamental building block of a stronger community. SKM will continue to amplify these messages through campaigns and tactical activations to remind the public that the daily choices we make can create a greater impact on our society. SKM has also
continued to roll out initiatives to promote neighbourliness through HoodChampion’s corridor decoration competitions. Through these initiatives, they hope to create opportunities for the public to interact with their neighbours and to be a part of their neighbourhood. 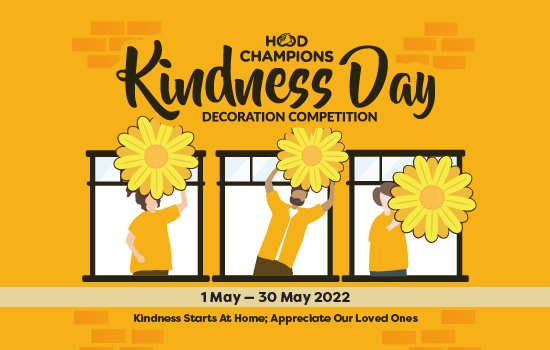 “As we continue to move towards the new normal, I am heartened to see that we as Singaporeans continue to maintain a good level of graciousness in our society. We have seen a change in the issues that affect our perception of graciousness as a whole, which is why the Graciousness Survey is an important study to gain insights into the evolving parameters of kindness. SKM will continue to amplify stories of kindness and promote the narrative through interactive channels in our neighbourhoods, workplaces, public spaces, transport, and schools. Let us work together to continue to build a kinder and stronger Singapore for all to live in.” commented General Secretary of SKM, Dr William Wan.

For more information about the Graciousness Survey 2022, please refer to the fact sheet.